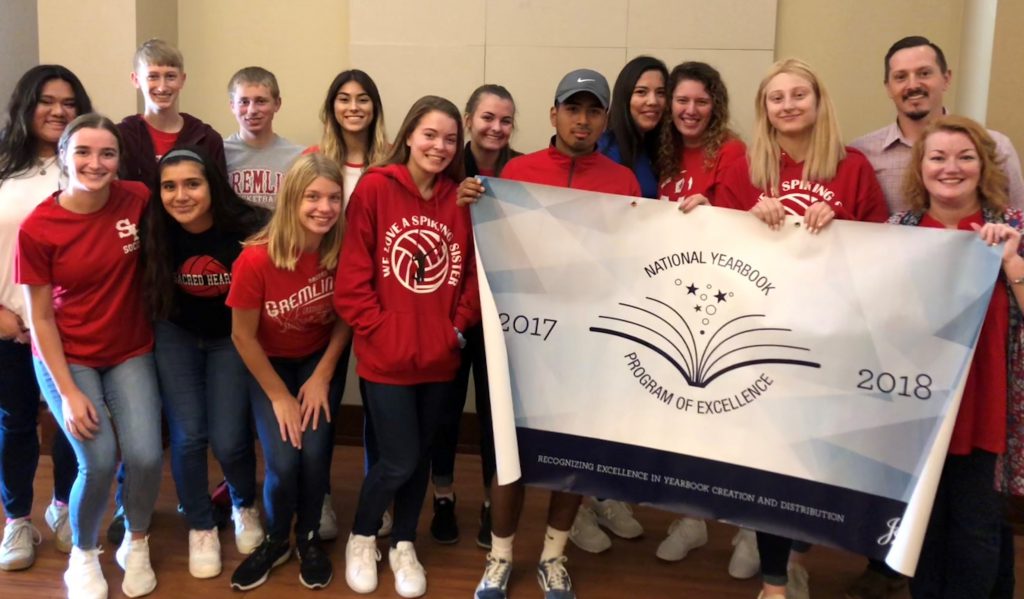 SHS advisor, Nikki Howell (far right), and her 2018-2019 Yearbook team accept the Josten’s National Yearbook Program of Excellence Award from Josten’s Representative Lucas McCain (pictured back row far right). Sacred Heart was among the two percent of schools nationwide represented by Josten’s that published a 2018 school yearbook that met or exceeded criteria to received the award.

Exceptional behind-the-scene efforts to create and market a quality yearbook for the 2017-2018 school year earned the Sacred Heart School Yearbook Team front-and-center recognition as a recipient of the Josten’s National Yearbook Program of Excellence Award.

To be considered for the award, the yearbook staff is required to complete the yearbook on deadline, sell the yearbook to at least 70% of the student body, and ensure that every student is pictured in the yearbook at least three times. From the 17,000 schools nationwide that partner with Josten’s to publish a yearbook, only 450 yearbook teams received the award.

Sacred Heart’s student yearbook staff, under the direction of faculty member, Nikki Howell, was among the two percent of schools nationwide to receive the award. This was Howell’s first year teaching the desktop publishing class.

“We weren’t aware there was an award,” said Howell, “We simply set out to create a yearbook our school family would be proud of.”

Howell and her current yearbook staff of 13 students were notified of the award at the Jostens Workshop in Columbia, Mo. on October 3.
“Anyone who has worked on yearbooks understands it’s a labor of love,” says Howell. “This is homework that people choose to buy sight unseen. It’s a big level of responsibility to capture the spirit of the school year creatively, concisely, and accurately. We are honored to be recognized with this award, but the greatest reward is the positive feedback we get from our students and parents. It motivates us to raise the bar for the next book.”

Howell says plans for the 2018-2019 yearbooks include featuring 100% of Sacred Heart’s student body in at least five photos, not including team and class pictures.

“Our student body keeps us on our toes because they create photo-worthy moments on a daily basis. It’s still early in the year, but I can already tell that we have another great yearbook in the works.”

Keep Your Memories for a Lifetime. Yearbooks are now on sale for 2019! Buy them early to get the lowest price of the year.

We have copies of past yearbooks available for purchase. Please contact Mrs. Howell for more information.